Given the amount of time between my last blog and this one, it would probably make a lot of sense to give some sort of programmatic update on Manna Project – but both Abbie and Craig have already done that, probably better than I could have. So, I´ll indulge myself a little bit by sharing some of the reading that I´ve done here in Ecuador. Given that I spent enough of my childhood in books to wreck my back at age twenty-three, you can likely imagine how much I am enjoying the amount of reading time I have here in Ecuador. 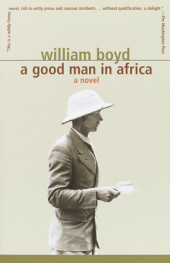 A Good Man in Africa, by William Boyd. Sorry William, but I probably would not have finished this book had I had any other Englsih material available to me in Santa Isabel during September. Although I will give Boyd credit for introducing me to more GRE words than any book I´ve read since high school.

Zen and the Art of Motorcycle Maintenance, by Robert Pirsig. After a few years rotting on the shelt, my decades-old copy of Z&A finally got another run. It is now held together by the only two rubber-bands I brought with me to Ecuador, and I have refused two people who have asked to borrow it for fear of its total disentigration. Remains one of my two favorite books of all time.

Baseball Dynasties: The Greatest Teams of All Time, by Rob Neyer and Eddie Epstein. As I mentioned in a previous post, baseball has come back in to my life swinging; part of that re-entry was brushing back up on my stats and trivia, which I was able to do thanks to Neyer and Epstein. Two thumbs up.

The Bottom Billion: Why the Poorest Countries are Failing and What Can Be Done About It, by Paul Collier. From what I can tell, there are three books out that are defining the conversation within the world of international development: The End of Poverty by Jeff Sachs; White Man´s Burden by William Easterly; and most recently, The Bottom Billion. If Jeff Sachs is overly whiny and optimistic about the role aid can play in development, and Easterly is overly pessimistic about aid´s failures, Collier deflty reminds us that aid, good or bad, is only one (small) factor in development. If you´re interested in why so many countries are still poor, start here.

Che Guevara: A Revolutionary Life, by John Lee Anderson. This image of Che, taken during a funeral in 1960, is the most widely reproduced image in the world. I figured it was worth finding out about in detail, and detail is what Anderson does. 700 pages worth. From the trip that inspired the Motorcyle Diaries (go watch that right now) to helping Castro overthrow Batista in Cuba, to his failed attempts at revolution in Congo, Argentina, and ultimately Bolivia, Anderson leaves out only the occasional cold-blooded firing squad episode.

Finding My Way Home: Pathways to Life and the Spirit, by Henri Nouwen. It is not often these days that a spiritually-oriented book catches much of my attention, but when my brother Robert recommends one, I read it. What I appreciated about Nouwen is his liberation-theology-influenced orientation toward the poor. His admonition to be “surprised by joy,” instead of expecting it, is sound counsel for those from the West living outside of the developed world.

Ensayo sobre la ceguera, by José Saramago. My first attempt at reading a legitimate piece of literature in another language is a story about a contagious blindness, and the lives of the infected who are quarantined in an old military hospital. I found out only after starting it, however, that Saramago was Portuguese, and wrote accordingly. No matter: I´m about 150 pages in, have at Abbie´s advice determined to power through without a Spanish dictionary, and am enjoying this story as much as any I´ve read in English. I guess those Nobel Prize folks can read Portuguese.

The End of Poverty: Economic Possibilities for Our Time, by Jeffrey Sachs. I guess I had to read it at some point, and Zak brought a copy. And as a clarion call for people in the US, and its government, to pay more concerted attention to the rest of the world, its important. Just started yesterday, and am so far unimpressed – likely in part because of Abbie´s poor report on Sach´s experimental “Millenium Village” in Kenya, which he touts in the introduction as the way forward for international development.

3 Replies to “Catching up”