I have spent 13 months now drinking the local Ecuadorian swill, a beer called Pilsener. 13 months. “Ecuadorianly Refreshing” is its midleading tagline, and the hooch has long been a key ingredient to Ecuadorian pride. Insulting Pilsener is equal to insulting the entire country. But man, it’s bad.

Imagine my surprise and delight, then, when Dunc informed me that the new corner store was selling Budweiser – the King of Beers – Grandpa’s nectar – for 89 cents a can. And, to top it off, the purchase of a six pack comes with a free Budweiser glass.

I know Budweiser is bad, too. And I know it’s Belgian. But sometimes little pieces of home, however processed or foreign-owned, can make an afternoon. 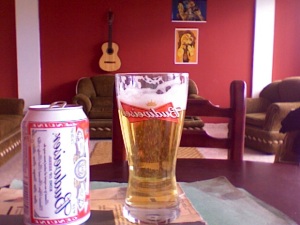